The Prelude to World War II exhibit chronicles post-World War I Germany, the conditions that allowed Adolph Hitler and his Nazi party to win the support of the German public, and his ambitions for Europe to be dominated by the Third Reich. Original uniforms and artifacts brought back by American soldiers after the war help bring this exhibit to life. The use of propaganda by all countries is also discussed as well as the essential role it played in swaying public opinion.

In August 1940, once Hitler and the Axis powers conquered the majority of Europe and Northern Africa, he turned his attention to the United Kingdom – which stood alone against the formidable German war machine. The Battle of Britain exhibit highlights the fortitude of the British people who were able to “Keep Calm and Carry On” under the leadership of Prime Minister Winston Churchill. A short film in our Battle of Britain Theater gives an overview of the importance of the Battle of Britain, how they were able to remain free, and why this accomplishment would have a direct impact on the United States.

While Germany was wreaking havoc in Europe and Africa, its ally Japan escalated its own campaign of conquest in the Pacific Theatre. The Day of Infamy exhibit examines the events surrounding the Japanese surprise attack on Pearl Harbor on December 7, 1941, launching the United States into World War II. After the Germans and the Italians declared war on the United States on December 11, 1941, the U.S. and its allies must come up with a plan to win the war with fronts on opposite sides of the globe.

The arrival of the newly formed United States Eighth Air Force in England offered the Allies a new weapon against Hitler’s Reich. Visitors walk onto a re-creation of Molesworth Airfield, home of the 303rd Bomb Group during World War II. A 90 foot long mural painted in oil by Ely Scardamalia and Patrick Dempsey surrounds a Nissen hut and control tower to create the feeling of entering onto one of the Eighth Air Force’s East Anglia bases.

The Mission Experience provides visitors with information of what it was like to fly a bombing mission as a member of an air crew stationed in England during World War II through three short films. Presentations begin every 30 minutes.

The Combat Gallery houses original aircraft, engines, and scale models as well as a multitude of exhibits. Inside the gallery is the Museum’s very own B-17 Flying Fortress, which is being restored as the “City of Savannah”. The original “City of Savannah” was the 5,000th airplane processed through Hunter Army Airfield in Savannah in 1944. Once completed, the new “City of Savannah” will be the finest static display of a B-17 in the world.

A second authentic aircraft is the Boeing-Stearman PT Kaydet. The PT-17 was one of the most widely used training aircraft in the United States.

Other features of the Combat Gallery include a P-51 Mustang model, a German Me-109 model, a Crosley CT-3 Pup vehicle, and the Ploesti Diorama, illustrating one of the most daring and dangerous bombing missions of World War II. Interactive exhibits in the Combat Gallery include a Navigator Exhibit, a Gunner Exhibit where visitors practice shooting down enemy fighters with a .50 caliber machine gun, and the Deenethorpe Diorama which illustrates how an average farm in East Anglia was transformed into an airfield during World War II.

Visitors enter the Airman Down exhibit by walking under an unfurled parachute representing the airmen who bailed out over enemy territory. This exhibit includes a recreated “safe house” and a POW camp which houses artifacts donated by former POWS.

After the German Army surrendered at General Eisenhower’s headquarters in Rheims, France, the Allies officially declared the next day, 8 May 1945, as Victory in Europe or V-E Day. The Lights Come on Again exhibit features photographs and memorabilia that show the joy in England as the Brits uproariously celebrated a return to peacetime and the end of almost 6 years of nighttime bombing of their homeland. On display is the Nazi flag that flew above POW camp VIIA in Moosburg, Germany. This flag was taken down on 29 April 1945 and replaced with the American flag when the U.S. 14th Armored Division liberated the camp. It is signed by over 100 POWs and their signatures and comments are a testament of American the spirit.

Although fighting was over in Europe, America and other Allied countries were not finished with the war. It would take several more months of brutal fighting and two atomic bombs to force Japan to accept unconditional surrender.

On 15 August 1945 Allied nations around the world celebrated Victory in Japan or V-J Day and the end of World War II. Japan signed the instrument of surrender on 2 September 1945 aboard the USS Missouri in the presence of 50 Allied generals and other officials including General Douglas MacArthur. World War II had ended.

In the Honoring the Eighth exhibit, there are collections of artifacts donated from various World War II Eighth Air Force groups. Rich in stories of heroism and memorabilia, visitors view some of the personal, treasured items of men of the Eighth. Following the display cases is a brief film about the contributions of the Eighth Air Force in the Mighty Eighth Theatre.

The Hall of Valor exhibit honors a number of outstanding individuals who served with the Eighth Air Force during World War II. Included are the aces, the Commanders of the Eighth Air Force, and those awarded the Medal of Honor. These men paved the way to an end to the war.

The Cambridge American Cemetery and Memorial Exhibit reminds all of the price that free men paid in defense of liberty during World War II. The staggering losses associated with World War II left an indelible mark upon the world. The Eighth Air Force alone suffered an estimated 26,000 combat fatalities.

Although not assigned to the Eighth Air Force, we honor the service of the Tuskegee Airmen and the Fly Girls of World War II.

On the second floor of the Museum in the foyer to the Research Center are exhibits entitled, “Don’t You Know? There’s A War On!” and “Doing Their Part! Girl Scouts in World War II.”

The Art Gallery displays paintings from the world’s leading aviation artists. Currently, the “Permanent Collection Exhibit” selected by guest curator, Keith Ferris, features 64 paintings by artists from around the world who specialize in aviation subjects.

Two aircraft immediately command attention as they sit in front of the National Museum of the Mighty Eighth Air Force. The first aircraft, an F-4C Phantom, was originally designed for use on board Navy aircraft carriers. In 1962 the Air Force adopted a ground attack version of the F-4, which was used extensively in Vietnam. This aircraft is on loan from the National Museum of the United States Air Force. The second aircraft, a Mikoyan-Gurevich MiG-17A, was introduced in 1951 and was used by North Vietnam and in many of the African and Middle-Eastern conflicts of the ‘60s, ‘70s and ‘80s. They were originally built as a subsonic, fighter-bomber designed to intercept straight and level enemy bombers. Once the U.S. introduced supersonic bombers, the MiG-17A was rendered obsolete on the front lines. This Russian built MiG-17A bears the distinctive insignia and camouflage pattern of the North Vietnamese Air Force. This aircraft is owned by the National Museum of the Mighty Eighth Air Force.

Behind the Museum in the Memorial Gardens is a B-47 Stratojet, a key aircraft used by the United States during the Cold War years that could fly at high altitudes to avoid detection. This aircraft was pivotal as a nuclear deterrent in the Cold War. The B-47 was America’s first swept-wing jet bomber and helped lead to the modern jet airliner. This aircraft is on loan from the National Museum of the United States Air Force. 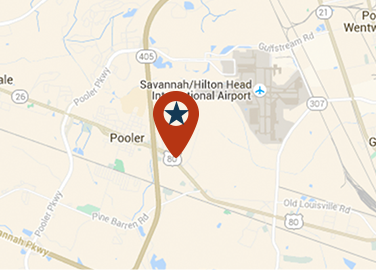 Come Visit for Yourself